The majority of tech professionals are pressured to roll out projects before they’ve undergone necessary security audits and hardening, according to a new security pressures survey from the security firm Trustwave.

65 percent of full-time IT professionals said management prioritized speed over security, according to the survey of 1,600 tech professionals from around the world. Worldwide, security is actually on a major upswing in this fight compared to 77 percent of IT professionals feeling this pressure in the previous two years. In the United States, however, there has been virtually no change: 71 percent of respondents are pushed to get projects out the door without necessary security checks. Only 35 percent of worldwide respondents said they never faced such pressure.

What happens to projects that set aside security in favor of speed?

The top two consequences tech professionals fear most from a hacker is personal and corporate reputation damage followed by financial damage to the hacked company. This is in keeping with a decades’ worth of industry data: More than any other possible outcome, companies worry that a major hack will cause customers to lose trust and walk away. That fear far outpaces even the fear of being fired after a major hack, which only 11 percent of respondents say they had.

The extent to which breaches have long term impacts on reputation or stock price is hotly debated. Home Depot, Sony Pictures, JP Morgan and Target, four major companies that fell victim to headline-grabbing breaches in recent years, have long since recovered past any short term financial and reputation damage done.

Customer data theft and ransomware, which exploded in prevalence over the last year, come in as the two most feared outcomes of cyberattacks, both of which are intimately connected to reputational harm. Some 7 percent of respondents say their organization won’t fall victim to a breach. 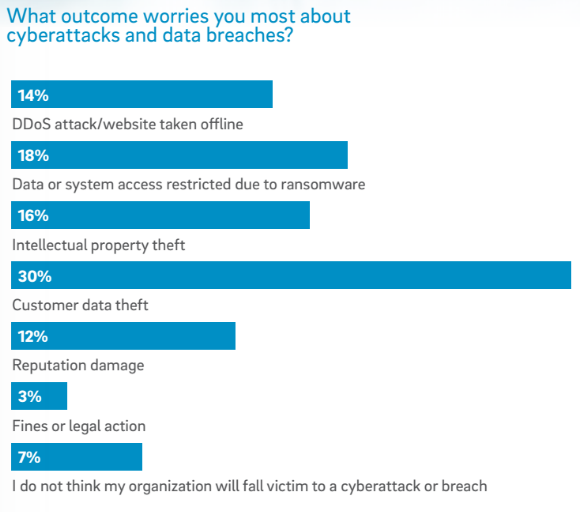 To address the fears, problems and pressures tech professionals said they faced on a daily basis, the wish list was simple: More budget (30 percent) and more skills (24 percent). Almost none of the respondents wanted more people on staff, preferring instead to give more money, power and simplicity to the team they already have.

by Tonya Riley • 4 days ago
Geopolitics

by Suzanne Smalley • 5 days ago
Geopolitics