Continue to CyberScoop.com
A DJI Phantom drone 2 (B Yestbo / Flickr)

The U.S. Army has banned the use of drones from the Chinese firm Daijiang Innovation Corporation (DJI) citing “increased awareness of cyber vulnerabilities” in DJI products, the drone blog sUAS News reports.

DJI, whose products are widely used throughout the Pentagon, told CyberScoop they are “surprised and disappointed” to read the reports and are reaching out to the U.S. Army for confirmation and clarification.

The Army did not respond to requests for comment and clarification from CyberScoop.

DJI, the world’s largest manufacturer of small civilian drones, shares sensitive customer information including “location, flight records and possibly video shot by users and uploaded to its servers” with governments that require it, including China, the company says. It’s not clear how this policy impacts U.S. customers, including the Army, or if this policy is related to the Army’s reported decision.

The memo, quoted below, outlines DJI’s popularity in the Army and the direction to “halt use of all DJI products.”

DJI Unmanned Aircraft Systems (UAS) products are the most widely used non-program of record commercial off-the-shelf UAS employed by the Army. The Army Aviation Engineering Directorate has issued over 300 separate Airworthiness Releases for DJI products in support of multiple organizations with a variety of mission sets. Due to increased awareness of cyber vulnerabilities associated with DJI products, it is directed that the U.S. Army halt use of all DJI products. This guidance applies to all DJI UAS and any system that employs DJI electrical components or software including, but not limited to, flight computers, cameras, radios, batteries, speed controllers, GPS units, handheld control stations, or devices with DJI software applications installed.

You can read the full memo, reportedly written by the U.S. Army’s Lieutenant General Joseph Anderson, below: 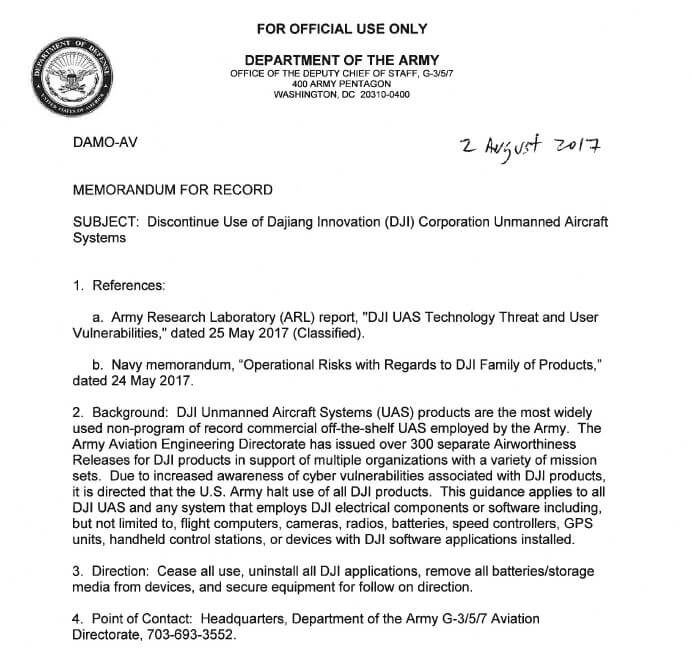 by Suzanne Smalley • 17 hours ago
Government

by Suzanne Smalley • 20 hours ago
Government