Cybersecurity stocks are trading up across the board Friday morning after news broke Thursday that consumer credit reporting firm Equifax was hacked.

The breach caused customer records to be compromised. As much as 143 million people may be impacted by the incident. The company is offering a free credit monitoring and scanning tool and ID theft insurance. But people are already having difficulties registering for the services.

Said site is now unsurprisingly being flagged as suspicious by OpenDNS (and probably others) ?‍♂️?‍♂️?‍♂️ pic.twitter.com/JZOIgSQpRo

Publicly traded cybersecurity brands like FireEye ($FEYE), Palo Alto Networks ($PANW), Fortinet ($FTNT), CyberArk ($CYBR) and Symantec ($SYMC) are already up as much as 3.3 percent from where they closed at the bell yesterday. FireEye is up approximately 8 percent since Wednesday, from $14.77 to $15.99.

Unsurprisingly, Equifax’s own stock has taken a hit. EFX is currently trading down by 13 percent to $123.98. At this time yesterday, the stock was worth about $142. 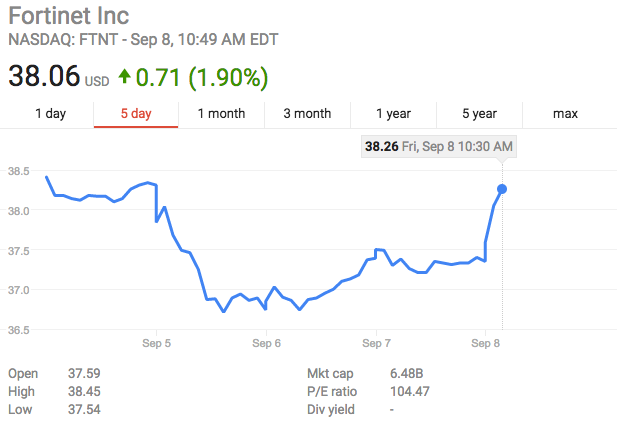 Mandiant, a subsidiary of FireEye, is reportedly working with Equifax to investigate the breach, according to ZDNet. Security researchers found that several domains were registered in the days before the breach announcement to apparently inhibit the Equifax hackers from potentially creating a website where they could possibly dump files. The registrant for these domains has the name of a current FireEye employee, prompting skepticism that the firm is in fact already working for Equifax.

Massive, headline-setting data breaches are known to cause a momentary spike in the price of cybersecurity stocks.

Significant events like the Sony, Target and Anthem breaches resulted in a flood of business for the larger industry, although the immediate impact was seen through public markets.